Thanks to Michael from Schaffhausen thermal spaces for the Jura and Baden-Württemberg were added.

New Thermal Spaces for mid-Germany and Austria were added. Thanks to Andreas and Gustav.

The collection sent by Rüdiger is now online.

Video tutorials on how to add new thermal spaces to the map are now available in English and German. Adding new spaces is very easy and can be done quickly using Google-Earth.

Furthermore more details were added for German Thermal Spaces, thanks Markus and Benjamin.

NEW: Google-Maps and Google-Earth Thermal-Spaces are available. Thermal spaces near Bremen were being added, thanks Torben Jacob

On my last traveling by glider trip I got to know Karli from Linz. He explained the thermal spaces at the CZ-Austrian boarder. Thanks.

A few years ago I got a photo of a thermal map of western Poland made by Janusz Centka. Now I implemented the very detailed thermal spaces to the digital data base.You can find them in the Download menu or in the file-manager of XCSoar.

Darius Liaugaudas made a thermal map for Lithuania and shared it with us. The map was implemented in Version 2.17 and is available in the download section.

This winter we started a new project. It makes traveling by glider more easy. Please take a look to www.TravelByGlider.eu.

The thermal map is now even more easily available in XCSoar¹ .

It was added to the File Manager. Hence it must only be setup once, updating the map can be done in seconds.

The same is true for the hotspots. We shifted them to www.openAIP.net, because it make no sense to have the same thing twice in the internet. Also the openAIP hotspots are included in the File Manager of XCSoar.

The thermal map was extended near Aachen and Hof (Germany). Thanks to Heinz Koch and Helmut Joost.

After half a year of operation we started to include wave areas as well. 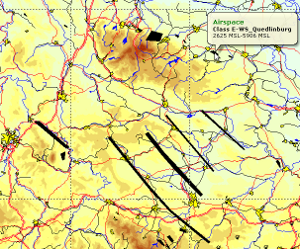 Waves of the initial data base for mid Germany

Wave lifts strongly depend on wind direction and speed. Thus for different wind there is a different file required to store the lift locations. The pilots can select the right file depending on wind properties and activate it in their navigation software to be able to navigate easily to lift locations. Goal for the future is to include more details in the wave dependency due to wind directions and speed.

Hotspots and thermal spaces west of Bremen (Germany) were added by Martin Emke.


Page: 1 2 »
News
to the news archive →
Support us
How can you help us to improve thermal information on glidinghotspots.eu?